In content matter, this is a departure, a diversion, from my usual focus on Early Childhood–I’m hoping not as far as it might seem.
If you find this post interesting and want to learn more about the James Baldwin Collection of the National Museum of African American History and Culture (NMAAHC), be sure to join today’s online event here this afternoon, 9/8/2015 at 3:30 PM Eastern.
If you miss this event, it will be available for viewing at the NMAAHC YouTube Channel. 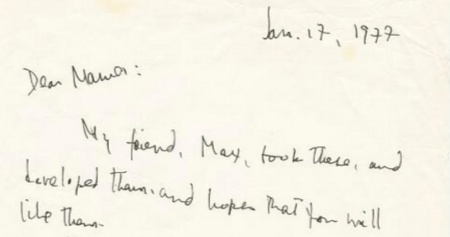 Clipping from a handwritten letter from James Baldwin to his mother, Berdis Baldwin, dated January 17, 1977. From the James Baldwin Collection, National Museum of African American History and Culture, Washington, DC.

My friend, Max, took these, and developed them, and hopes that you will like them.

He hopes more than that, actually-: as the song says, motherless children have a hard time – And there are so many ways to be motherless.

In the middle of my hardest book. But, you will say, I always say that. Well. It’s always true. And have another book in my head, kicking my behind, kicking this one out. Pray for me.

See you soon- around May.
love,
Jamie

Earlier this summer I stumbled over a now-completed volunteer online project through the National Museum of African American History and Culture (NMAAHC) seeking help in transcribing artifacts related to the life and work of James Baldwin. This proved to be one of those moments that comes along, something shiny and surprising that grabs your attention and demands action. Encountering the barriers that arise when you have a plan in life but each step seems a diversion1, I was an eager accomplice. The concept of visually wading through a few items and immersing myself in Baldwin’s handwritten work, even (or perhaps especially) tiny bits of it, was instantly appealing, for a host of reasons.

First and foremost, I have loved the work of James Baldwin for decades. An aimlessly frozen 17-year-old, I was captivated by one of his stories found in a collection of assigned reading, most likely “Sonny’s Blues”, and sought out more. (The letter from Baldwin to his mother, transcribed above, would have been written not long before I discovered his work.) A lover of short stories, and an older brother myself like the narrator in that story, I found the original collection of Baldwin stories containing “Sonny’s Blues”, titled Going to Meet the Man, and was hooked. It was not long before these words led me to Baldwin’s novels (especially Another Country and Giovanni’s Room) and essays (particularly those in The Fire Next Time); challenging concepts from beyond my world.

Decades later, my personal learning from reading Baldwin’s work is impossibly complex. I’m writing this, in fact, to memorialize just a few of the elements of that learning, still going on today, and other works that I’ve come across with (sometimes cryptic) connections–perhaps more for myself than you, the reader.

[Baldwin’s] was the “voice in the wilderness” that preached the necessity of touching. In his personal life and his work, he took the side of those who were made into exiles and outcasts by barriers of race, sex, and class or who turned away from safety and chose the honorable path of tearing down such barriers. But he mourned for those who had created the barriers and had unwittingly allowed themselves to be destroyed by them.2

And I take all I can from Baldwin, his beautiful language, and his power as a witness. I am still sorting out all that I take from his letter to his mother that I transcribed two months ago. As I do–focusing, of late, on understanding all I can in the thought that “there are so many ways to be motherless”–I’ll listen to Blind Willie Johnson and read some more.

One thought on “Meaningful diversions…”