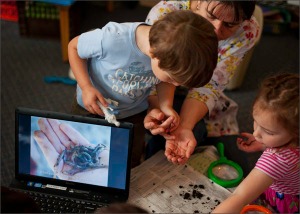 The old adage claims that politics makes strange bedfellows; if so, policy sometimes makes for unusual adversaries. The exploding market of digital devices and apps directed at (and marketed to) young children has generated a policy debate that finds friends with common interests on opposing sides.

With the publication of their January 2012 Joint Position Statement on Technology and Interactive Media as Tools in Early Childhood Programs Serving Children from Birth through Age 8, the National Association for the Education of Young Children (NAEYC) and the Fred Rogers Center for Early Learning and Children’s Media at St. Vincent College, two of the country’s leading authorities on developmentally appropriate practice, weighed in with a middle-ground position. Rejecting the position of those who advocate complete screen-time bans as extending to any media (not just passive TV viewing or the like), the Position Statement is a carefully considered look at a wide range of “technology” and its potential repercussions–and benefits–at the full scope of ages from birth through age 8.

Instead, the Statement limits its recommendation for an outright embargo on screen time to children 2 and under. For older children, the Statement advocates for careful, limited use of a variety of media, focusing on how the technology is used, including: a familiar and sound emphasis on interactivity; support for an emergent approach to children’s own interests; and use of technology as an additional tool in the box for educators and parents, not a replacement for more traditional methods.

In May 2013, the perspectives of Pittsburgh-area educators were included in an article in Education Week magazine on the competing views on this issue. Educators like those featured in the Education Week article typically agree with some arguments of the advocates of strict limitations on new media use with young children, particularly with regard to manipulative commercialization aimed at children and the slippery slope that can come with screen time (away from interactivity and relationship-building, toward passive viewing and disengagement); see the comments to the online article for some well-argued concerns. However, the support of NAEYC and positive models like the educators featured in the Education Week article make many cautiously optimistic about the promise of technology as a series of positive and unique tools that can bring much good if used in a constructive and intentional way.

For some other resources on the issue, please click here to visit the site of the Pittsburgh NAEYC chapter, PAEYC, with a brief summary of their work on Digital Media Literacy in early childhood. Among the outcomes of PAEYC’s Digital Bridge Project, in collaboration with several provider organizations and local nonprofit Computer Reach, are developmentally-appropriate, emergent curriculum materials that are tied to the use of technology and the PA Early Learning Standards. Kudos to PAEYC and the primary funder of the Digital Bridge Project, PNC Grow Up Great, for their support and collaboration on this work. Please see below for a link to the May 2013 Education Week article on the debate.

This post originally appeared, in a slightly different form, at the Along Shady Lane blog, © 2014 Shady Lane, all rights reserved. Reprinted with permission.